Last fall I stumbled upon a short story contest whose only parameters were that the story be less than 1000 words and that it be somehow related to the visual prompt: a lovely and haunting watercolor by artist Maggie Chiang (shared here with permission). The contest was scheduled to close the very next day, but the visual prompt was so compelling that I had try. My submission was not selected, but I still like my little 998-word story, which is set in my old college town. I think it pairs with Maggie Chiang’s gorgeous watercolor nicely, though I can’t wait to read the winning entry. 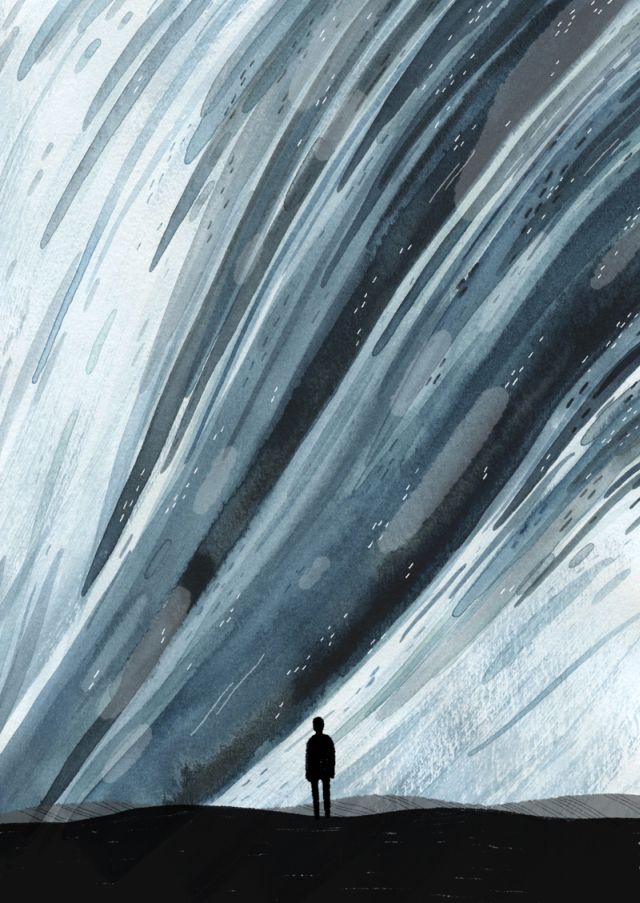 Everyone always told me that WSU was a party school, a reputation it earned back when you could drive 15 minutes to the border and take advantage of Idaho’s lower legal drinking age. But that era was long passed, just like the days of finding a lucrative job (or any job) straight out of university. Now we were two days from graduation, and as a way to toast our dearly departed hopes for easy employment, my roommate Trevor and I had decided to drive his Honda to Moscow, Idaho and throw back a few drinks before we had to start paying off our massive student loans.

It was supposed to be a night of celebration: we were done with finals, soon we’d get to walk across a stage while wearing stupid hats with tassels and get given a really, really expensive piece of paper that claimed we hadn’t wasted the last four years. But we were talking with some girls and pretty soon, beers in hands, music thumping, somebody brought up “next,” as in, “So what are you going to do next?”

“Well, I’m a Communications major,” I said. “I’m hoping to maybe work for a non-profit in their marketing department, or something? I’ll probably have to volunteer for awhile, to get some experience, you know?” I didn’t mention my secret ambition of being a YouTube celebrity.

“The job market kind of sucks right now, you might have noticed,” Trevor said, and the girls nodded somberly.

“You’re a Theater major, man,” I said with a laugh, my brain buzzing. “What did you expect? That’s not the economy, that’s like… forever.”

The girls giggled and Trevor fumed. I don’t know why I said it, I guess somebody called me funny as a kid and I’ve been trying to live up to it ever since, and I took another swig of beer to hide my smile.

“Well, maybe you can use your great new communication skills to get another ride home,” said Trevor, and he glared at me and left.

I chuckled, thinking he was kidding and had gone to the toilet to cool off, but when he still wasn’t back 20 minutes later I excused myself and checked the parking lot. He and his Honda were gone.

I tried texting a few friends asking for a ride but no one replied, and I was pretty sure I didn’t have enough money for a cab. Besides, I felt bad for making fun of Trevor’s prospects and thought I deserved to walk. Since my phone wasn’t helping me get a lift, I used it for Google Maps to find my way back to campus. I didn’t fancy getting smeared across the highway, so I opted for the back road through farmland. My phone said it would take me about three and a half hours, so I was looking at getting to my dorm around 4am.

“Shit, really?” I muttered. At least it would make a good story.

I kept my phone out and shot some video as I walked, though it was too dark to make out much after I left the lights of Moscow. It was pretty chilly too, and I wished that for once I had traded the cargo shorts for pants, and I retreated as much as I could into my Wazzu hoody. The hills of the Palouse rolled out in all directions, the wheat fields rippling in the moonlight. I’d always been charmed by the warm glow of the golden hills in the daylight, but in the darkness they had a different kind of magic.

An hour passed and I was surprised to find that I felt more awake than I had, maybe ever. The beers had worn off and the crisp air pricked at my skin all over. Nearing the middle of the no man’s land between Moscow and Pullman, Washington, the sky had bloomed into a field of stars. It felt like I could see the universe moving over me. And all of a sudden I felt so very alone.

What was next for me? I was on a conveyer belt I couldn’t halt, about to be dumped out of the educational machine into the unknown. I’m not one of those creative types, like an artist or musician, who could make starving seem cool. No, I was pretty sure I’d be sleeping on a pile of ramen wrappers in someone’s closet while working part-time at McDonald’s, my framed diploma propped up with a few cinder blocks as a shelf for the expensive textbooks I couldn’t sell back. Or worse, I’d have to move back in with my parents. Was this really adulthood?

There was a rumbling from behind and soon two headlights cast my shadow ahead of me. There was a squeak of brakes and a rusty pickup pulled up beside me. An old man leaned out of the driver’s side window, looking at me over the hood.

I was getting pretty cold. “I’d take a ride, thanks.” I opened the heavy door and climbed in, figuring if he murdered me at least I wouldn’t have to pay off my loans. He watched the road in silence. A grocery bag sat between us with a six pack and a gallon of milk in it.

“So, are you going to espouse some wisdom while we drive? Don’t you old guys all give advice?” I asked.

“What do you need advice on?”

“Nothing,” I said. Apparently this was just a night of me saying stupid things.

“You’re graduating soon, are you?” the old man asked. “Well, sure, here’s some advice for you. Be a doer, not a thinker. We got too many thinkers, and not enough doers. You can sit around thinking all the grand thoughts you want and it won’t make a lick of difference unless you do something.”

“Alright, thanks,” I said, and he dropped me off. I kind of wished he’d killed me.