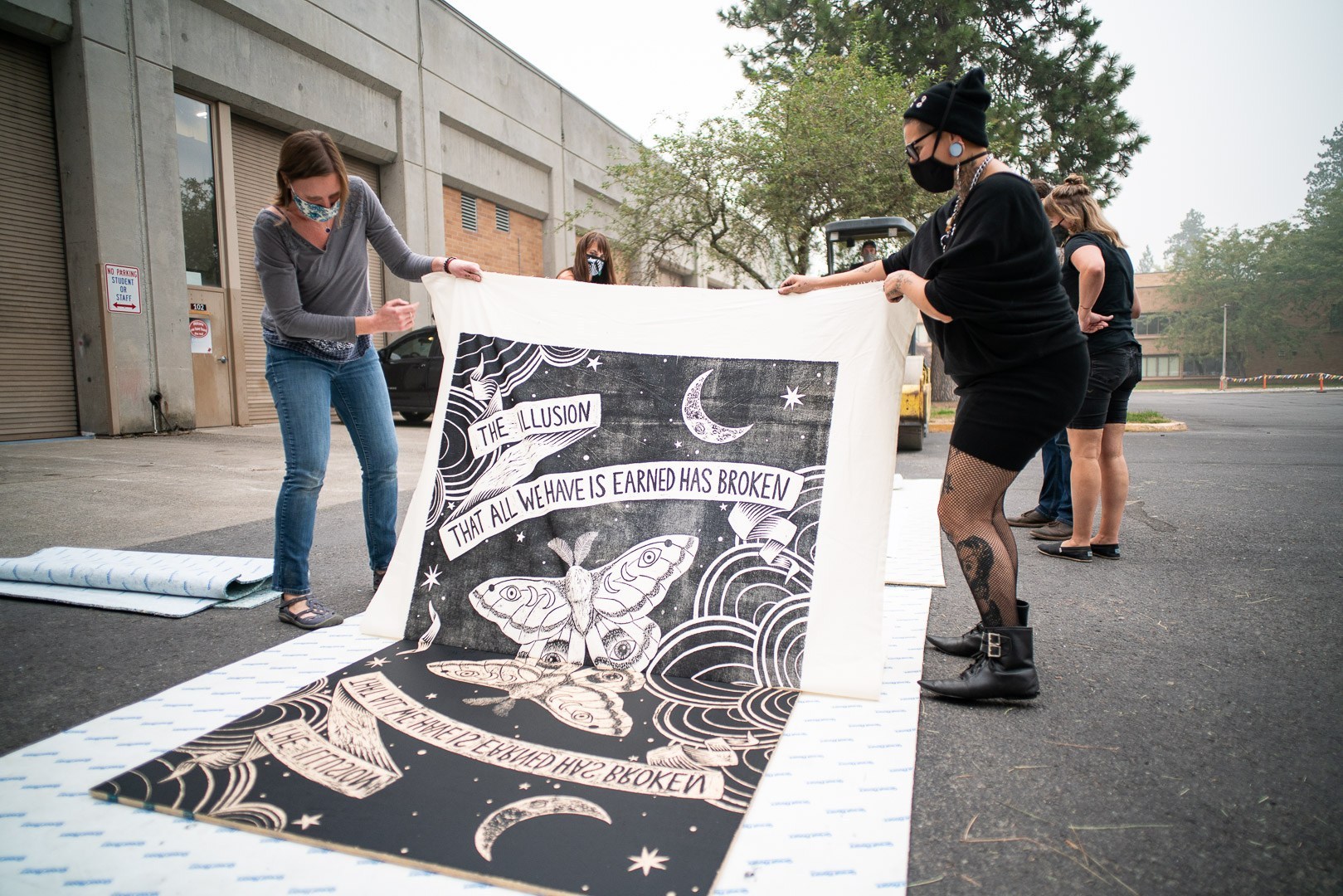 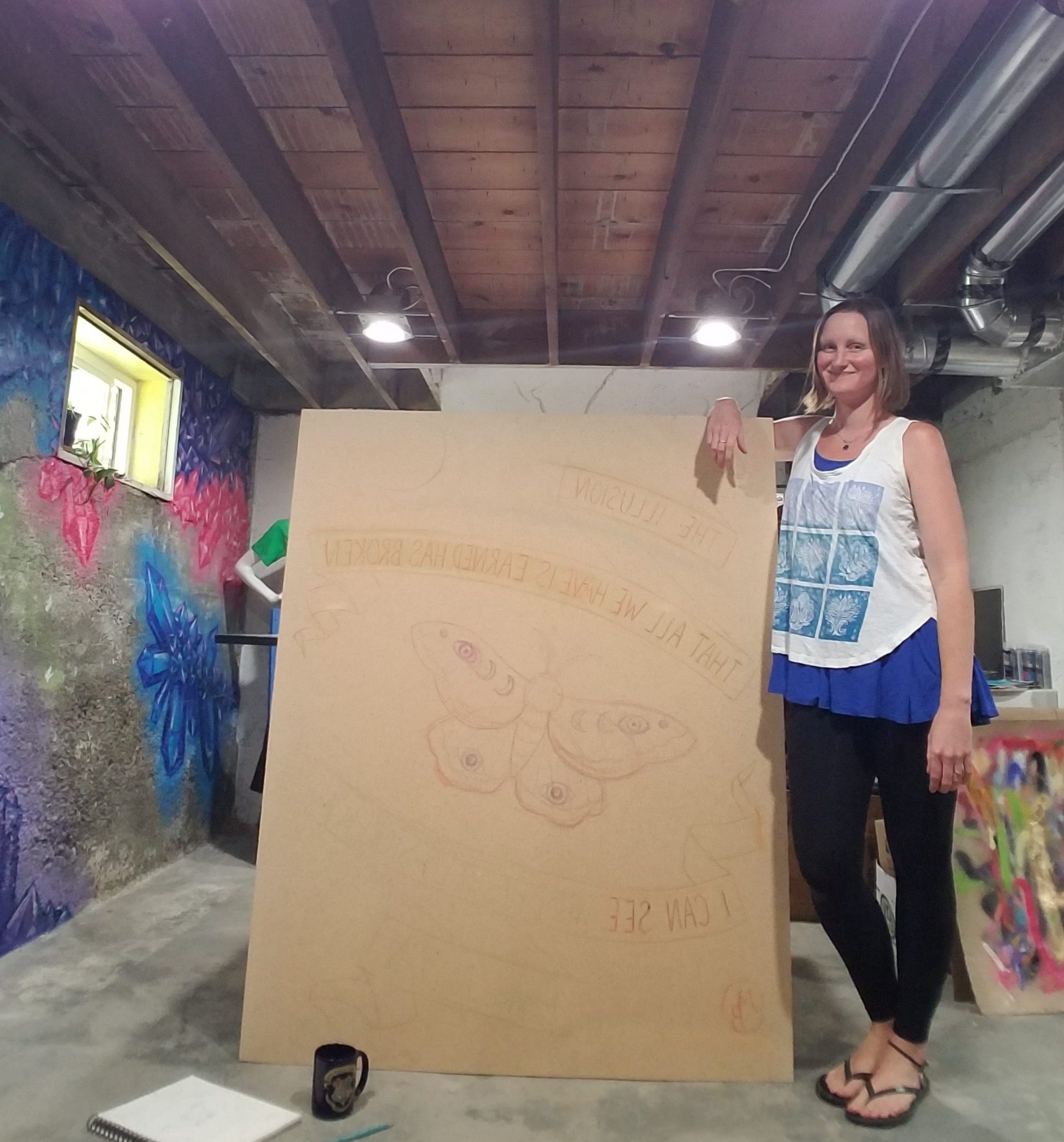 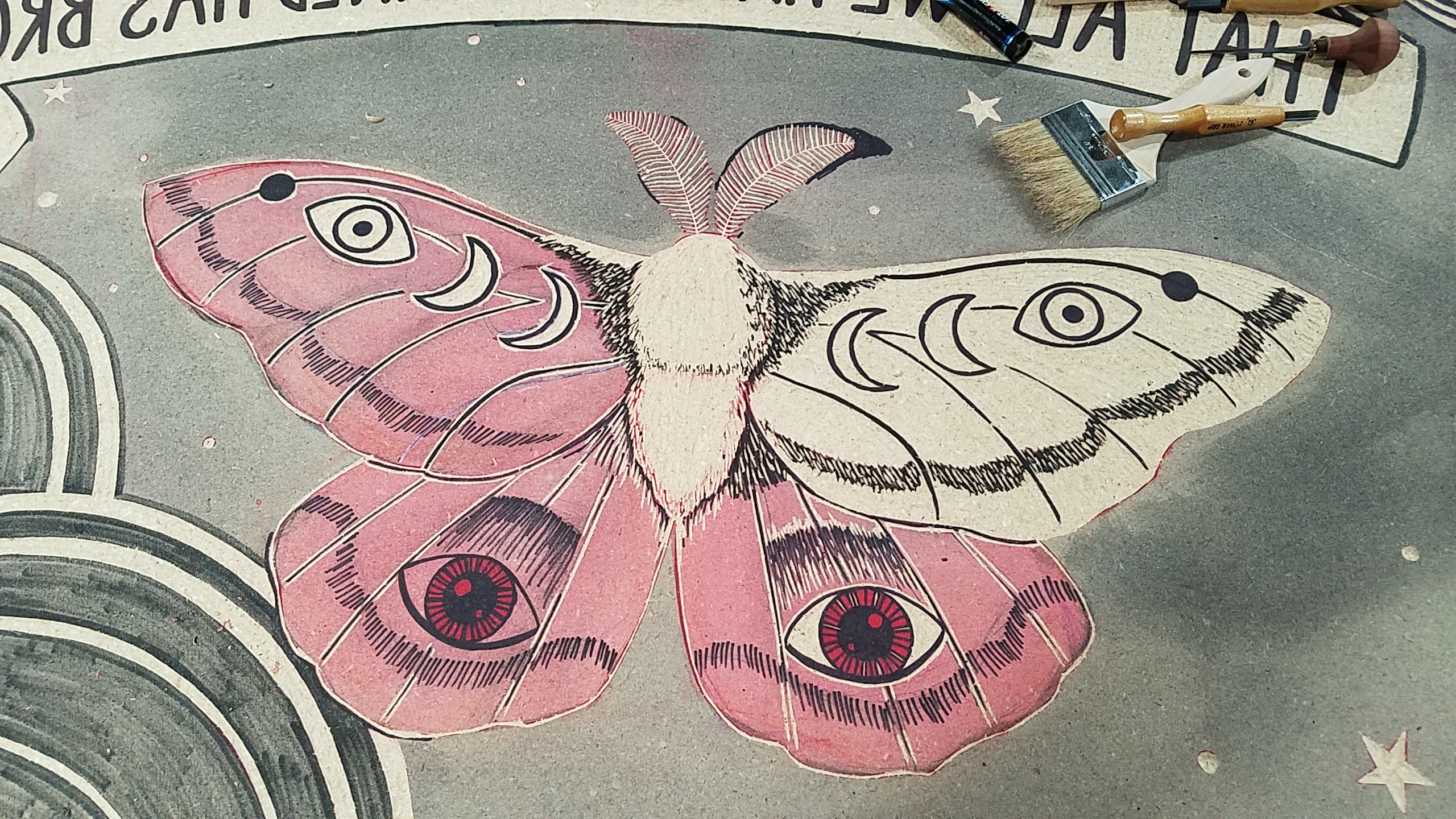 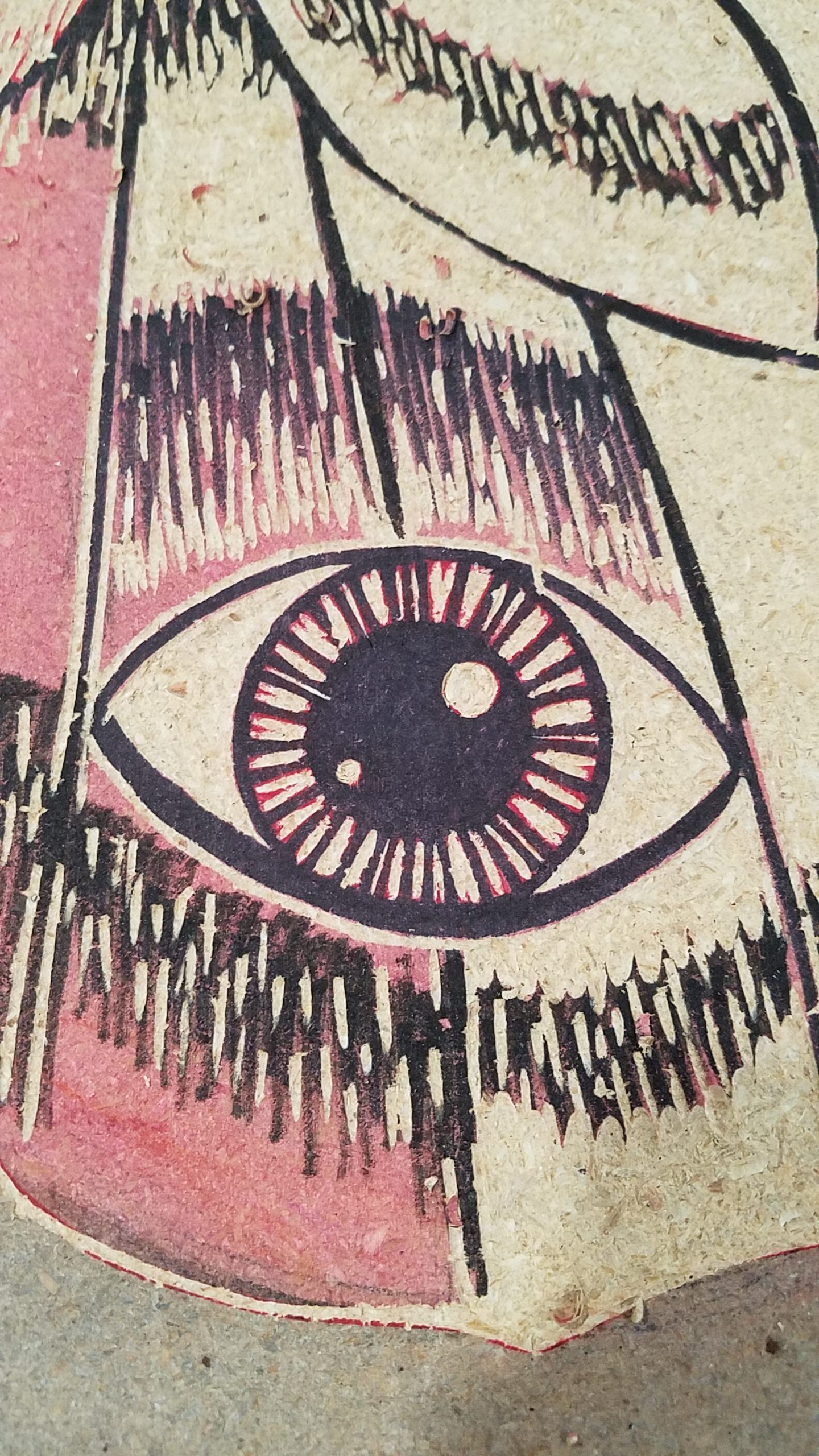 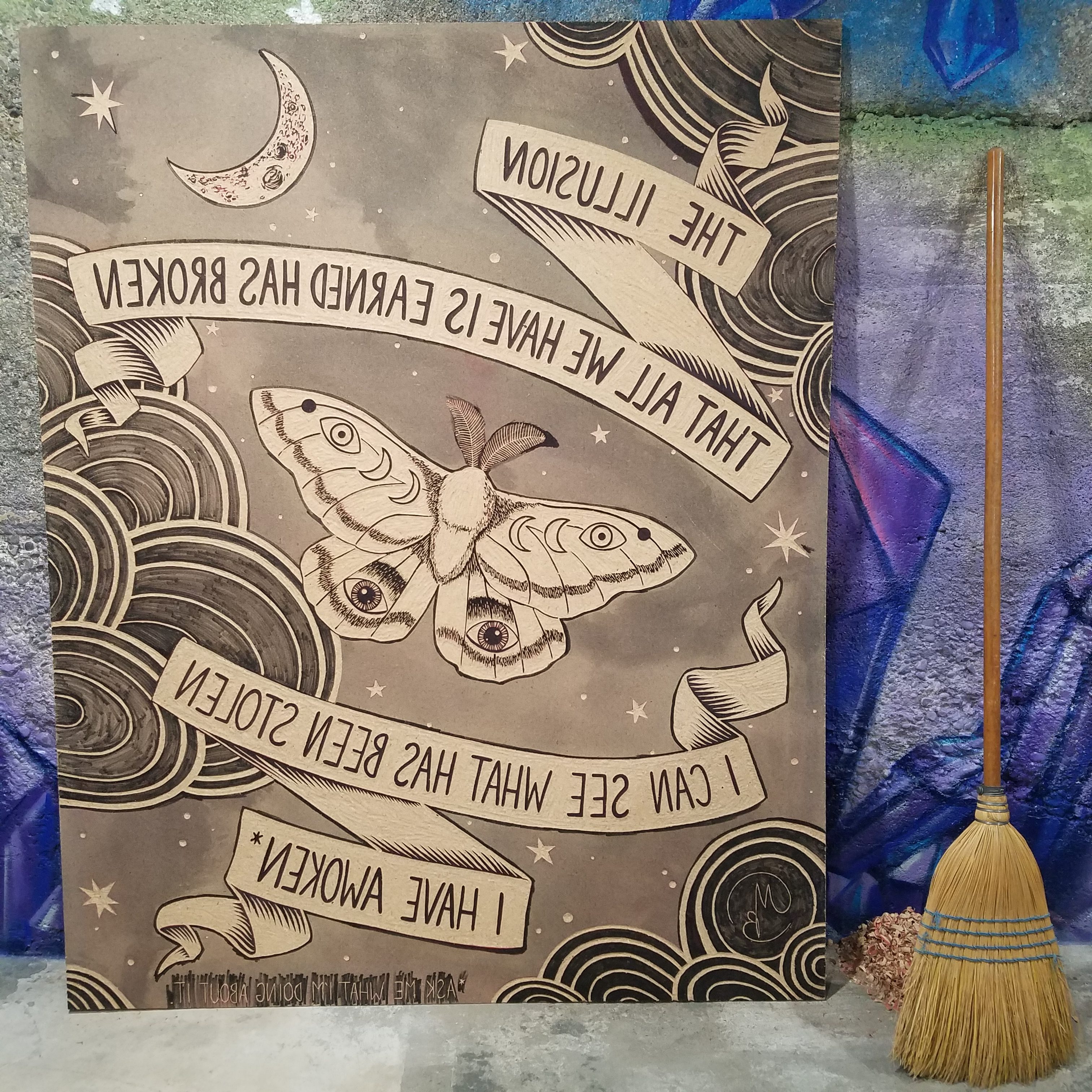 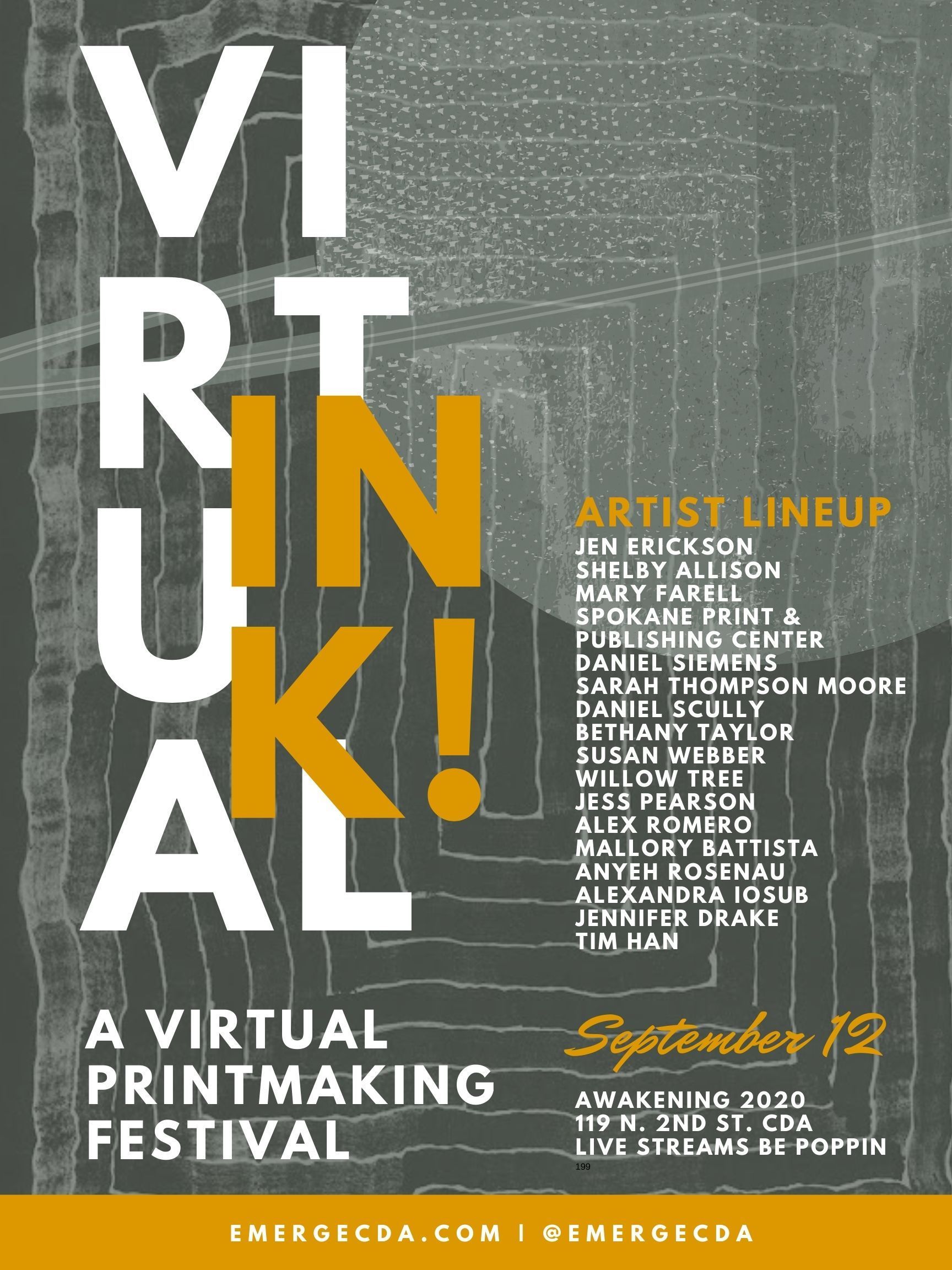 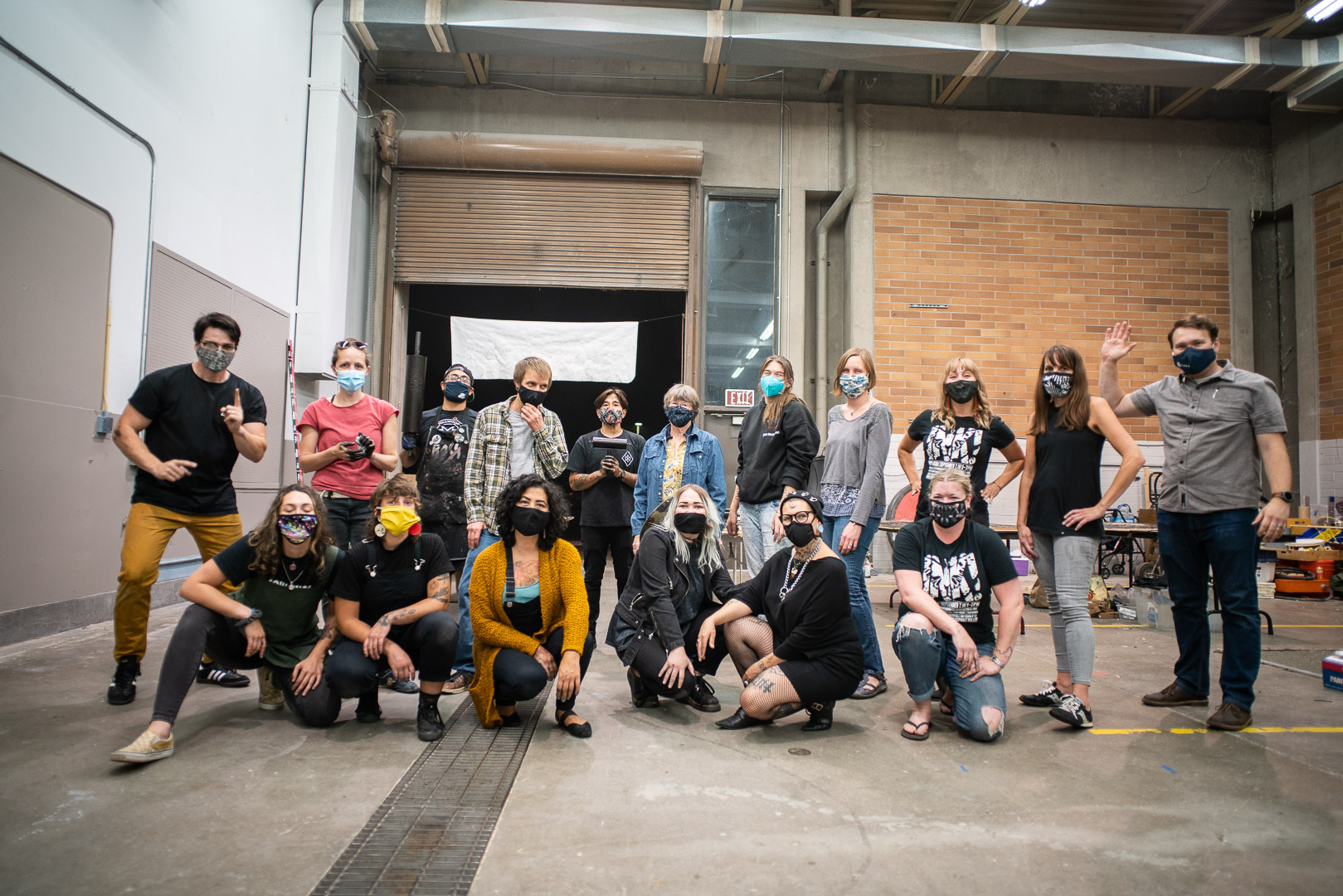 INK! Print Rally at the DRIVE-IN at Hayden Cinema (Photos by Angus Meredith) 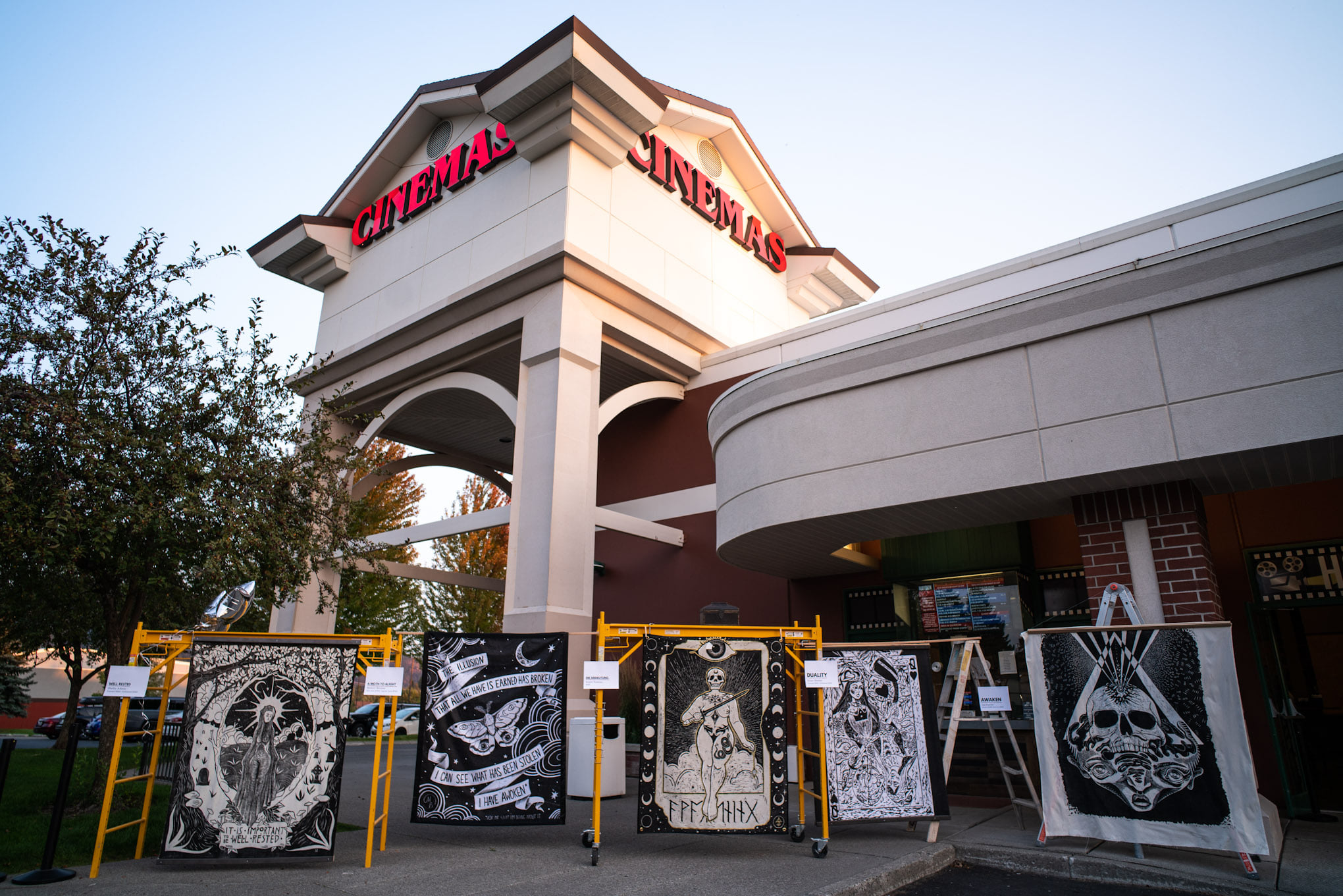 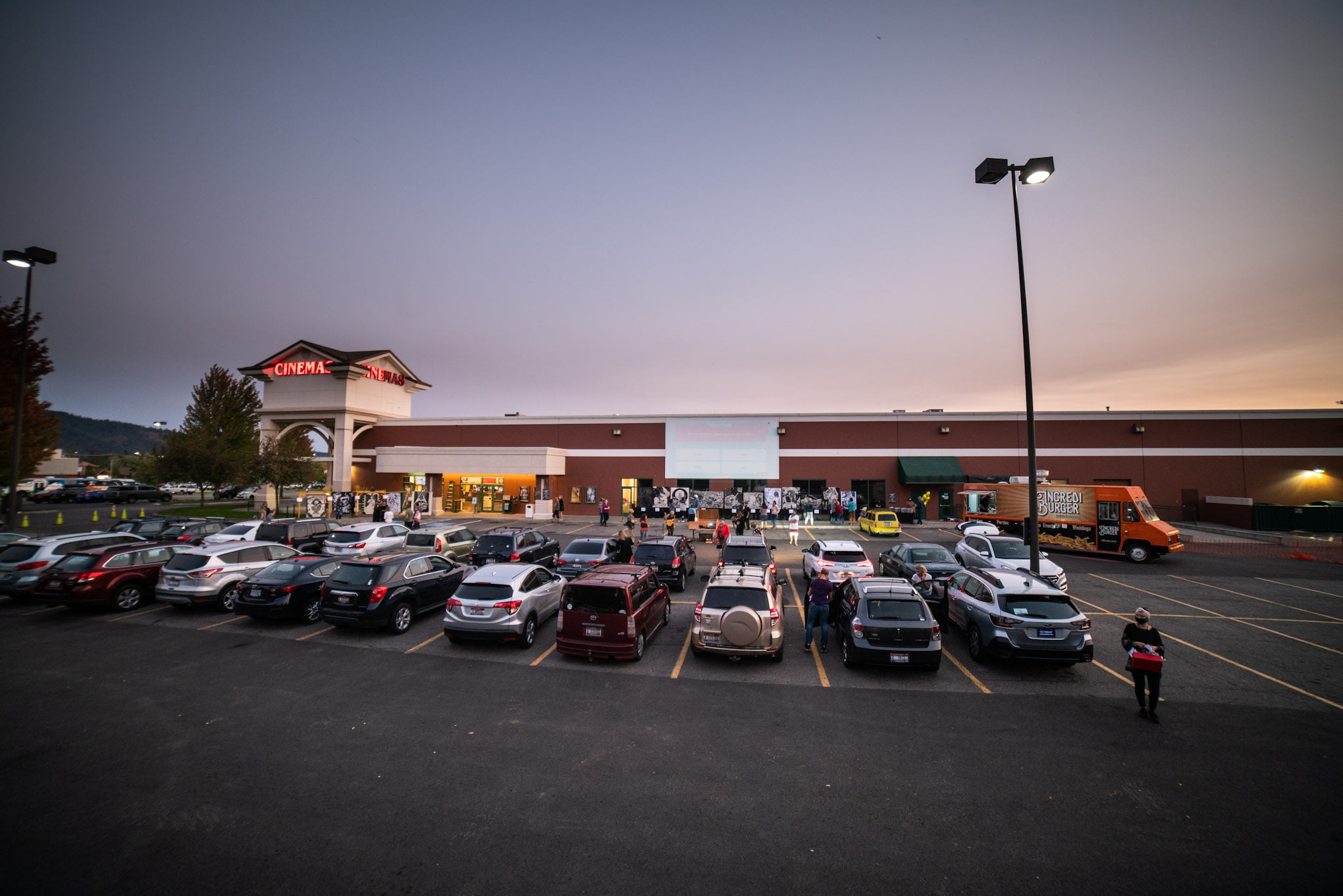 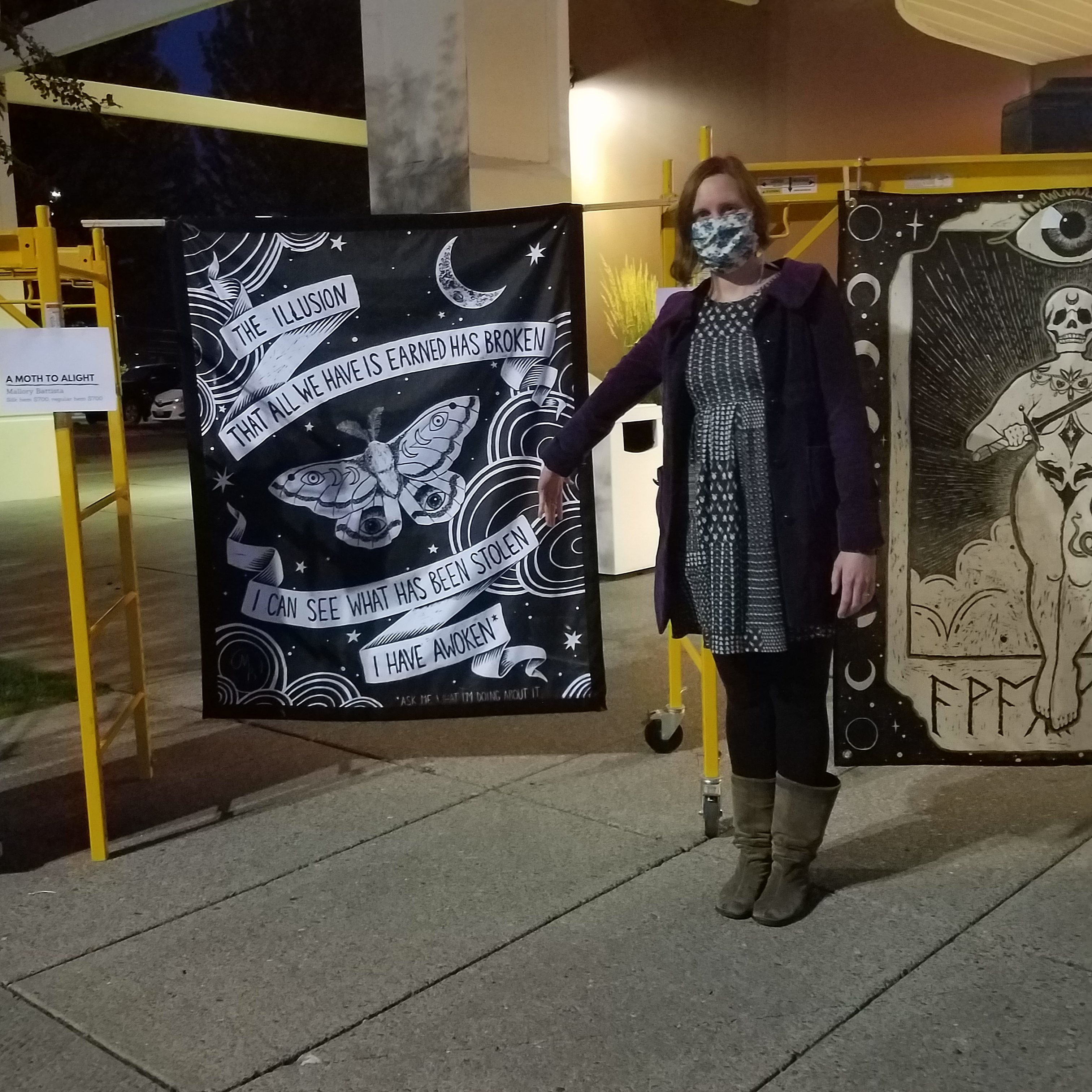 The INK! Print Rally was a many weeks long process of designing, carving, inking, steamroller printing, finishing, and then presenting black 4×5′ prints on fabric. The annual event by the Emerge art gallery in Coeur d’ Alene is usually an all-day public event with food trucks and a DJ and art booths selling prints and other wares. This year, it was an artists only, masks on, wildfire smoke filled printing event that they thoroughly documented on video and then creatively screened at a drive-in theater, where the prints were revealed and attendees were waited on by CDA’s roller derby team delivering gourmet food truck dinners. Talk about making lemonade out of lemons!

With COVID going on, I actually hadn’t planned to participate in the INK! Print Rally. It wasn’t until I heard the theme, Awakening, that I decided I had to give it a go. This is a year of awakening; that’s the silver lining of all the tragedy and struggle that 2020 has delivered us. I have hope that it will shape us and that our society will come out of this with more compassion and understanding on the other side. Working on this woodcut for countless hours, sketching and then inking and then carving, was like a meditation, and I wanted to share my intention for the artwork here in detail for anyone who cares to know.

The symbolism of the imagery is probably pretty obvious. Butterflies are often a symbol for transformation, and I depicted a moth here for the same reason: moths also transform through metamorphosis but are nocturnal and more suited for this 1-color print. Some moths have eye-like markings on their wings, which was a nice visual for the theme of awakening. I also added some moon phases to the wings. The moon is also a strong symbol of change, and the waning crescent moon in the night sky above is close to entering a new phase. 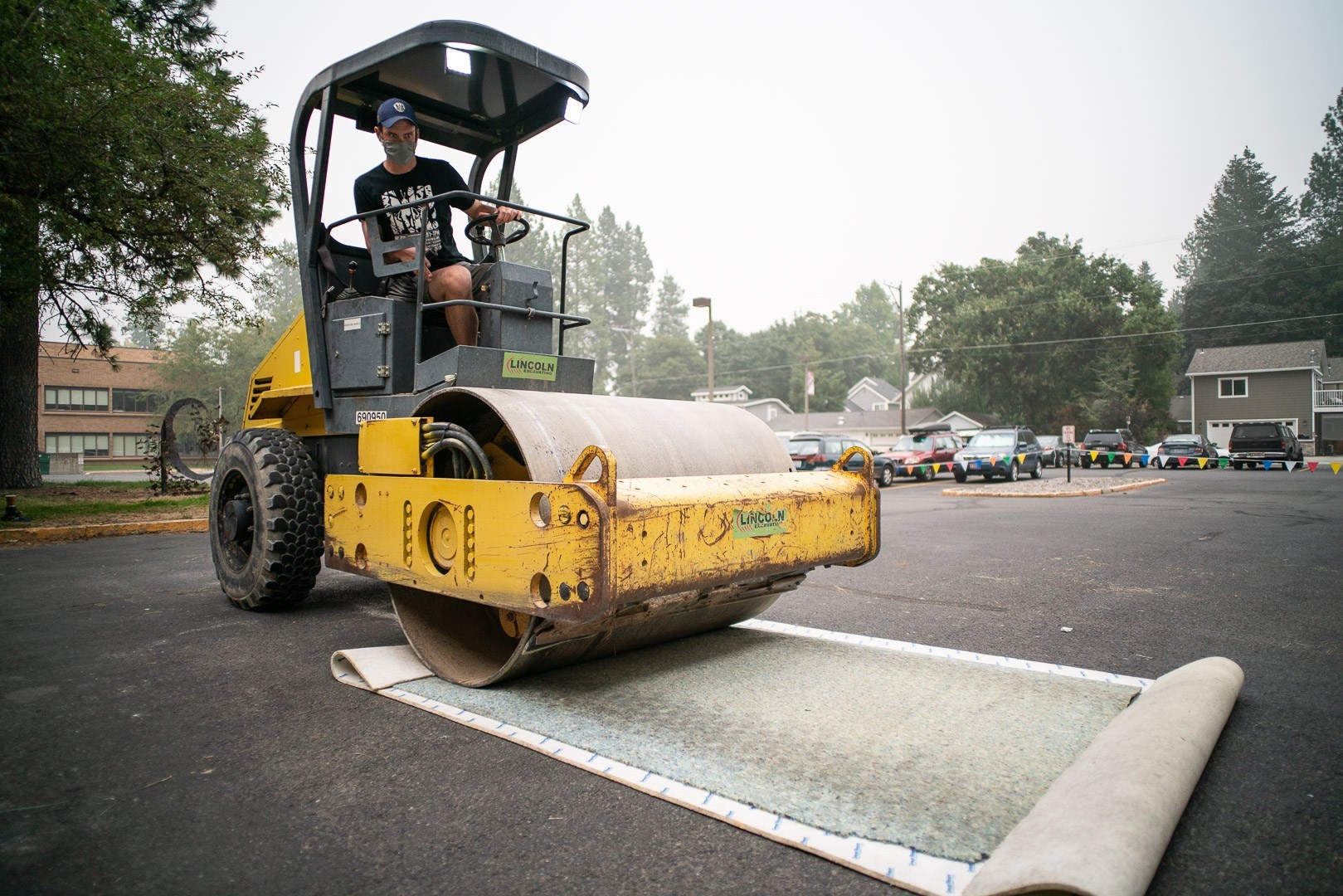 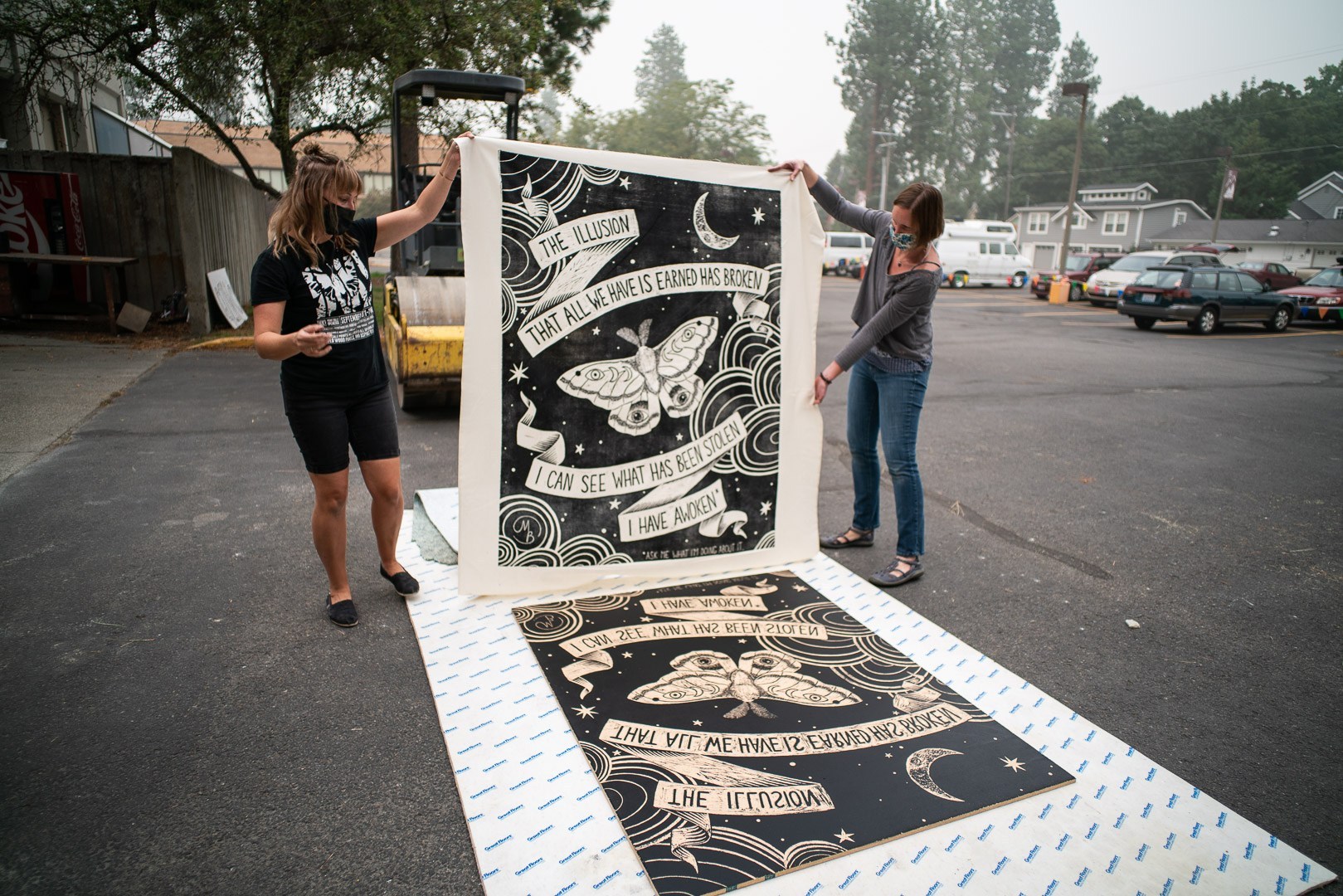 The banner on my woodcut reads:

that all we have is earned has broken

I can see what has been stolen

As a white person, I was brought up comfortably in a society that placed me at the center of the story and crafted a narrative of our history that was guilt free and heroic. That was the illusion. It has broken in the last handful of years as I have learned more about our history in America and the mindset of colonialism that we continued after splitting from the British. I see now that the land of the free only provided freedom to some and was largely built by the free labor of Black people. I see that “all men are created equal” was not written to mean all men, and certainly not women, but only included white men. Might meant right throughout our country’s history as native tribes were slaughtered and their food supplies destroyed as we forced them off the land we wanted for ourselves. Time and again, American settlers and elected officials and our military abused native tribes, broke treaties, murdered, raped, and pillaged to carve out our country. Later, assimilationists with the backing of police forced native children into boarding schools to be indoctrinated, converted to Christianity, and abused. It was literal and cultural genocide. This isn’t “ancient history,” it is our country’s foundation and continues to affect us all today.

When white people complain that it’s “always about race,” we need to remember that it was white people that made race the deciding factor in whether a person could vote, own property, become a citizen, marry a particular person, work certain jobs, receive an education, or whether they were enslaved or not. If anyone is guilty of making everything about race it’s white people, and always it has been to our own benefit. This has had a huge systemic and generational effect on white people’s wealth and ability to succeed in this country. America is not a level playing field, it never has been, and we need to confront our privileges if we ever hope to have an equitable society. Privilege is an advantage that wasn’t earned. All we have isn’t earned, much of it is the result of what was stolen by our ancestors and the imbalance maintained by every generation since, and we can either willfully ignore the inequity in our society or we can work to create an equitable one. Because once you’ve awoken to the truth, you can’t unsee it and it changes you.

I included at the bottom of my woodcut an asterisk, with the words “Ask me what I’m doing about it.” This was the most important part of the piece for me, a call to action, because awareness by itself doesn’t change the world. Saying “I have awoken” is kind of a joke, because there is always more to learn, more to become aware of. It doesn’t end when you wake up to the problems, that’s just the start. If someone hangs this artwork up they should be prepared to answer the question of what they’re doing about inequality. Here are some suggestions that I have been working toward personally:

-Listen to Black and indigenous people. Read their books, listen to their podcasts, follow them on Instagram, read their articles and try to understand their perspective. Support the work of activists and educators monetarily if you are able. Follow artists, read authors, watch actors, listen to musicians, etc. who come from different backgrounds than you and let their art broaden your perspective.

-Google it. If there is something you’ve been wondering about, do your research like you would anything else, rather than asking for free labor from Black, indigenous, or other people of color to explain it to you. The conversation may seem novel to you, but you would probably be surprised how many unwelcome race related questions people of color have had to field over their lives, and they are not obligated to spend the time and energy to educate anyone. Those that choose to deserve our gratitude and compensation.

-Support Black, Indigenous, and other minority owned businesses and non-profits.

-Educate yourself on the terms white savior, white gaze, and gaslighting. Reflect on your own racial biases and do the internal work to correct them.

-Recognize that we live in a white supremacist society, and all of us are bound to have racial biases because we have been bombarded with messages from all directions since birth, from blatant to subliminal, that white people (especially men) are in power because of their superior achievements throughout history and today. The truth is that men and women of all races have contributed significantly to our society, despite the significant barriers created to exclude women and non-white people, especially Black and indigenous people.

-Call out racism when you see it or hear it. Educate with compassion when possible.